University of Delhi is the premier university of the country and is known for its high standards in teaching and research and attracts eminent scholars to its faculty.It was established in 1922 as a unitary, teaching and residential university by an Act of the then Central Legislative Assembly.The President of India is the Visitor, the Vice President is the Chancellor and the Chief Justice of the Supreme Court of India is the Pro-Chancellor of the University.

Ever since its inception, a strong commitment to excellence in teaching and research has made the University of Delhi a role-model and path-setter for other universities in the country. 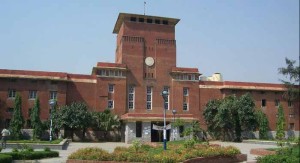 The University of Delhi is one of the largest universities in India.

Sir Maurice Gwyer, the then Vice-Chancellor, realizing the importance of a distinguished faculty to act as role models, relentlessly searched for talent all over the country and roped in men of eminence to this University, such as Prof. D.S. Kothari in Physics, Prof. T.R. Sheshadri in Chemistry, Prof. P Maheshwari in Botany and Prof. M L Bhatia in Zoology.